The Essence of Instruction by Ramana Maharshi 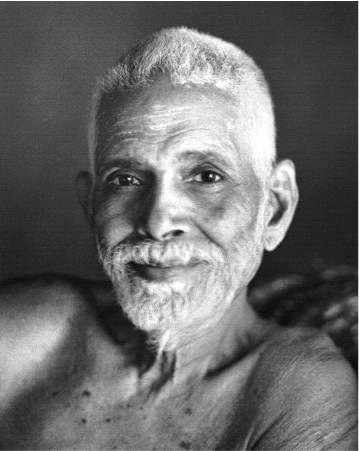 In 30 beautiful verses, Ramana Maharshi offers his Essence of Instruction for awakening to our True Nature.  For Ramana it’s not a complicated road map.  The direct path is simply ‘Return to the Self…Abide as Being’.  He assures us for everyone this path direct is open.

This short text is a valuable resource for exploring “Being” as a portal to our essential nature.  It also supports iRest’s inquiry into the Asmitamaya Kosha and the discernment between the I-though and Pure I-ness.

Ramana understands that it is ‘thought’ that takes us into separation and away from the Self and the purity of Being.  For Ramana, the ‘I’ thought is the root of all thoughts.

His instruction is always the same.  Turn the mind within and seek the source of thought.  As we do this with the ‘I’ thought, it dissolves in its home ground of Pure Being revealing a different sense of ‘I’; what Ramana calls the ‘I…I’ of the non-separative One, the Self, the Infinite, the Heart of Being.  In the final verse he writes,  “Fictitious ego-I dissolved… Being beyond separation… this is the greatest realization of all.”

Ramana’s description of the importance of discriminating between these two perceptions makes me appreciate even more Richard Miller’s addition of the Sheath of I-ness (Asmitamaya) to the traditional Yoga Nidra practice.

The awesome clincher of Ramana’s Essence of Instruction is that as we Abide as Being, as separation drops away, spontaneous qualities of Heart arise. To look at a picture of Ramana is to see the love and light that is embodied through his recognition.

After reading previous books on neuroscience, it has been fascinating to read this simple and direct text.  Learning about the functions of the Focusing and Defocusing Networks of the brain sheds light on the efficacy of Ramana’s instruction to move from the thinking mind to the felt recognition of Being.  And, I can’t help but consider the awesome potential of the basic principle of neuroplasticity: whatever we put our attention on, and repeat over time, builds neural structure and predisposes us to that.

Reading this manuscript has deepened my inquiry into the functions of thinking and feeling.  It has also supported my deepening inquiry unto the feeling of Being that dissolves separation and reveals the awareness of Beingness everywhere.  Ramana’s insight has been a beautiful reminder to me, to grow more attentive to the separative ‘I’ thought as an identification that takes me away from living fully as the Great Healing of the ‘I…I’.

Writing this reflection has been a very provocative play between thinking and Being.  I have found myself getting caught up in the thinking mind … over and over again, while Ramana’s essence of instruction had continually offered me the invitation to return to Being…over and over again.  So enough of this thinking for now!  Let’s just Abide as Being!

…Love to All, Peace to All!

P.S. Kirtana’s album “Falling Awake” has an exquisite piece called “Ramana’s Song”. I think you will like it.

The Essence of Instruction

"As long as there is the impression of separate objects, so long the inquiry "Who am I?" is required."