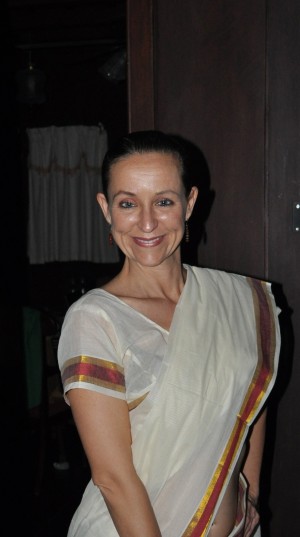 Sandra Doherty Healy (E-RYT 500, YACEP) first discovered yoga in 2000 when the challenges of juggling a full-time career and graduate studies prompted her to explore pathways to alleviate stress. Her journey began at the NYC Sivananada Yoga Center and since then Sandra has studied other forms of yoga to include Yin, Restorative, and her personal favorite Ashtanga. Sandra’s passion for Ashtanga stems from the practice’s simultaneously dynamic and meditative nature.

The peace Sandra gained from her daily Ashtanga practice proved essential during her two deployments in Afghanistan. While engaged in her own self-practice at the gym soldiers--often yoga novices-- would ask if they could join & quickly an informal yoga community emerged. A few times every week these informal yoga gatherings offered participants a tranquil respite from the stress and tension of life in a war zone. Inspired by the men and women who joined her on the mat in Afghanistan, Sandra obtained her 200 RYT (registered yoga teacher) certification studying under the direction of Ashtanga teacher Caroline Klebl.

After her return from Afghanistan, Sandra was eager to continue her work with military personnel & particularly interested in the benefits of yoga for individuals coping with post traumatic stress disorder (PTSD), Traumatic Brain Injury (TBI), & combat stress. Sandra was introduced to the Yoga Warriors® method which incorporates positive affirmations into the yoga practice addressing the nervous system from the bottom up (using the power of the body to influence the mind) & top down (using the power of the mind to influence the body). Sandra studied with Yoga Warriors International founder Lucy Cimini & since then has taught Yoga Warriors classes with both military and non-military groups in Afghanistan, US, & Germany.

Eager to travel to the birthplace of yoga & revisit the country that captured her heart a decade earlier, Sandra sojourned to India where she completed her 500 RYT under the tutelage of Libby Cox and Mollie Galbraith of Global Yoga Shala.

In 2013, Sandra became a Level 1 iRest® Yoga Nidra teacher & recently relocated back to Stuttgart, Germany where she shares her passion for yoga and its therapeutic benefits with members of US military and their families.

Off the mat, Sandra is an anthropologist and holds graduate degrees from Georgetown University School of Foreign Service and the City University of New York.