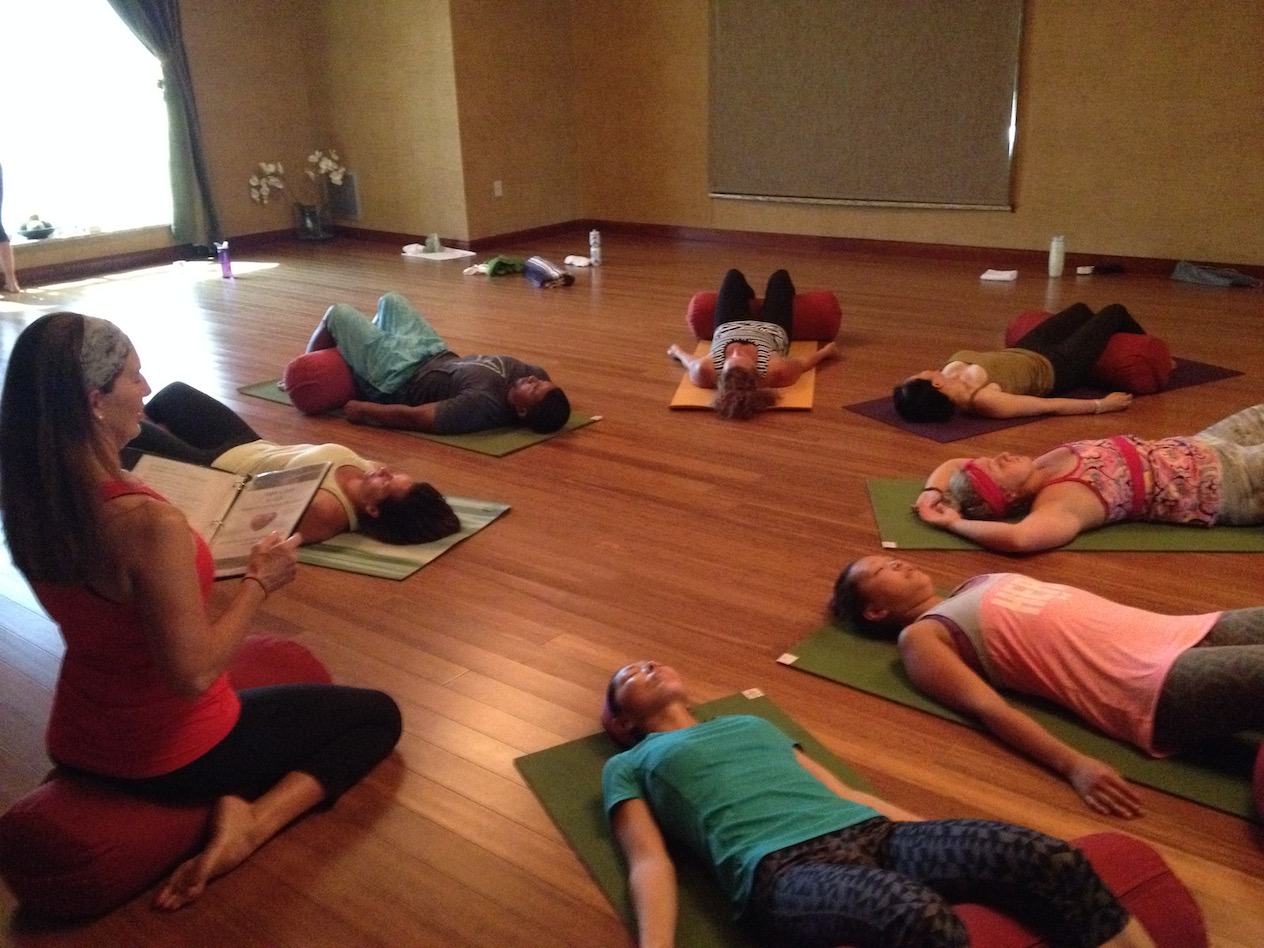 A large Fitness Center has partnered with the Wounded Warrior Project in select regions to provide 6 month memberships to local Warriors and their family members, which includes full use of the facility, sessions with personal trainers, child care services and access to the latest equipment and health screening. Currently, we have 25 Warriors participating in the Colorado Springs, CO location, which is saturated with a strong military community.

Permission was granted for me to lead a 5 week iRest practice, meeting with the Warriors once a week. It is believed that this was the first time iRest was practiced within a Lifetime club.

During our first gathering, a young Army Veteran commented that “I hate people; hate the sound of children playing outside and have so many demons that I have not slept in years”. He declared he would stay awake and alert, yet was asleep and snoring within 3 minutes.

When he “awoke” at the end of the session, he mentioned that he could hear me the entire time, knew that he was snoring and was terrified for the children he could hear playing in the indoor pool (our studio is located above the aquatics area). What was revealed to him during a flashback was not a hatred for “children playing outside” but an actual fear for their safety. I assured him that the children were swimming in an indoor facility and that adults were caring for their safety. He smiled, shook my hand and said, “I don’t hate you. I will come back next week”.

Another Army Veteran developed seizures, ticks and stuttering post deployment and an acute fear of most places. It remains a courageous act for him to navigate the halls of the club and find his way to the studio room each Wednesday. During our third session, he invited his father to attend, a Vietnam Veteran himself and his son’s primary caregiver.

When I asked the father why he had chosen to participate this day he answered, “I wanted to witness first hand what was finally helping my son to sleep and not be afraid. If it’s working for him could it work with my nightmares?” Father and son rested on their mats side by side with the older man gently touching his son’s hand, a pure display of love and an example of the motto, “never leave a man behind”. Joe would later comment that,

“As a wounded Veteran with physical and emotional scars, this meditation was amazing. It helped me find a peace in which I could open up to some of the emotions that I have kept locked up in my mind. It gave me new tools in which I could use in my everyday life. I was able to use the meditation practices to find an easier way to fall asleep when sleep was hard to find. While enduring another MRI at the VA, I was for the first time, able to control my anxiety. I not only made it through the exam but I rested peacefully during the normally loud, obnoxious, small, cold machine as it imaged and mapped my brain for the doctors. “ Joe F., SFC, US Army (retired).

Today, I returned from Seattle after teaching all weekend at a women’s healing retreat where I was able to provide two iRest practices. Most of the women attending had a connection to the armed services; as wives, formally active duty themselves, mothers of service members or mental health providers working in the military treatment facilities. Erin S., a guidance counselor and mental health provider at a military high school in Germany for 8 years, where deployments and trauma are an inevitable part of life, had this to say after her second iRest practice:

“This practice reminded me to take care of myself and that it is okay to be me even if I do not know what is coming next. I was able to feel myself, my energy, wishes, desires, struggles, road blocks and gates and move to a place of peace and joy.”

This is my family, a community that I have been a part of since 1989 and will continue as my oldest son enters the Air Force. For years I have worked with, for and alongside the strongest and fittest Americans, loyal and committed to service. When the scars of war began to appear on our bases, they were mostly visible. Yet it was immediately apparent that the invisible lurked beneath the surface.

What has not changed? These same Americans remain strong, loyal and committed to service. It is those of us who have been given the gift of compassion and choose to serve who have to change our perspective, approach and resolve to also never leave someone behind no matter where the battlefield may lie.