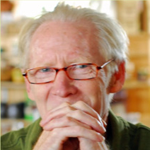 With deep love and respect

We offer our deepest farewells to Mukunda Stiles, one of the American pioneers in Yoga Therapy, and a dear friend. Mukunda was a true Yogi whose actions were deeply rooted in his love of all things spiritual. He will live on forever in our hearts.

Mukunda was the author of the best seller Structural Yoga Therapy, the Yoga Sutras of Patanjali and edited seven books on Ayurveda. His rendition of the Yoga Sutras was praised by BKS Iyengar, Baba Hari Dass, and David Frawley. He also wrote, Ayurvedic Yoga Therapy and Classical Yoga Meditation:Practices from the Yoga Sutras. Mukunda trained spiritual mentors with the Claritas Institute, headed by Joan Borysenko and was an advisors for the International Association of Yoga Therapists.

Mukunda first practiced Yoga while in the Army as a candidate for West Point Military Academy during the Vietnam era of 1969. In this unlikely environment, his first exposure to yoga's energetic breathing practices created an out of the body experience and a spiritual awakening. As a result of this his addiction to smoking cigarettes abruptly stopped. The awakening to his intuitive voice guided him to leave his pursuit of a military career at West Point to develop his latent psychic ability into a gift of healing. After his army service, he pursued an economics degree at the University of California – Davis. In April of 1974 he had another abrupt meeting with destiny through Swami Muktananda who initiated him into a deeper level of spiritual life through the Tantrik Kundalini process of Shaktipat. The effect of this deeper connection with Spirit was profound. "My life has never been the same."

He moved into a new direction and received a degree in religious studies with a thesis on Patanjali's Yoga Sutras. Baba Muktananda encouraged him to make Yoga his profession and gave him the name Mukunda, an aspect of the Divine Presence as the compassionate liberator. Under Baba's guidance, he trained in the 900-year old lineage of Prof. T. Krishnamacharya and has studied with many of his senior teachers including Indra Devi, BKS Iyengar, AG Mohan, and TKV Desikachar.

He worked closely with Rama Jyoti Vernon, founder of America's first professional Yoga school, the Institute for Yoga Teacher Education (renamed the Iyengar Yoga Institute), and received his first teaching certification there in 1976. Mukunda set up three residential Yoga centers including the Sacramento Holistic Health Institute, offering state approved vocational training in Yoga, Massage/Bodywork, Rebirthing, and Holistic Lifestyle Education. It was during this period that he developed Structural Yoga Therapy (TM) and wrote his first books on this innovative process. To polish his understanding of anatomy and kinesiology he undertook a year's graduate study in physical therapy at California State University in Sacramento.

Since 1978 Mukunda offered teacher certification courses. Among the graduates are the staff of the Nityananda Institute, Rudra Press, and founders of the Yoga Teachers of Colorado.

Mukunda was Yoga instructor at four of Muktananda's ashrams and studied in India with both unknown teachers and two major mentors. Swami Shyam of Kulu instructed him in Raja Yoga, culminating in his own poetic rendering of the Yoga Sutras. Babaji Prakashananda became his spiritual teacher following the samadhi (death) of Muktananda in 1982. Babaji initiated him into the devotional aspects of Tantrik Kundalini Yoga. Mukunda's book The Yoga Poet and Agaram Bagaram Baba - The Life, Teachings and Parables of Babaji Prakashananda) by Titus Foster, describe these mystical yogic teachings.

In 1981 Mukunda moved to Boston and founded the Yoga Therapy Center. He worked by referral from hospitals, physicians, and therapists to provide personalized Yoga Therapy for a multitude of medical and psychological conditions. He shared some of these insights in a series of articles on Yoga Therapy for knees and shoulders published by Yoga International magazine. He taught at the Mind Body Medical Institute, headed by Herbert Benson, M.D. and Joan Borysenko, Ph.D. for five years and published a paper entitled a Survey of Yoga therapy.

In 1992 he re-connected with Rama Jyoti and joined the executive board of Unity in Yoga International Conferences, participating in events in Canada, Scotland and Israel. In 1995, with Rama and Nancy Ford-Kohne, he co-founded American Yoga College, a collaboration of other senior teachers to train a new generation of yogis who sought professional standards. Through AYC he gave trainings in England, Russia, Brazil, and Argentina, and wrote the Asana teacher training manuals. In 1998, his spiritual guidance directed him to go on retreat recently to the redwoods of Northern California to live with a secret yogi and re-connect with the healing power of Nature's Life Force. Much of the next three years was spent reframing the connection of Ayurveda within the spiritual framework of a Yoga lifestyle.

In the last years Mukunda enjoyed the company, support and dedicated care of Chinnamasta Stiles, who lovingly accompanied Mukunda in all aspects of life.

IRI and myself extend our sincere condolences to Chinnamasta and Mukunda's family members at this time of reflection and transition.