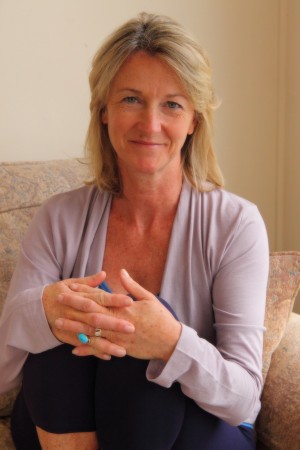 Gemma was born in Dublin, Ireland, though has spent the majority of her life in the Chicago area. In 1990 She left corporate life after a 10 year career of trading and clearing securities as a Institutional Trading Assistant. The next 15 years were spent being a full time mother to her two daughters. During this time she volunteered within her community and school district.

In 2001 Gemma began her practice of yoga. It was not long after that 20 years of back pain, caused by scoliosis, disappeared. The mental benefit of the quieting the “chitta” or chatter of the mind was also felt. Her love and dedication for the practice continued and in 2006 she completed the 200hr Teacher Training at Yogaview, Chicago, IL.

It was during this training that meditation and yogic philosophy where added to the pot! Meditation led Gemma to experience the alleviation of a life time’s worth of anxiety that had been just waiting to be Welcomed!

In 2008 Gemma was introduced to iRest® Meditation and became a Certified iRest Teacher in 2011. She is grateful to Richard and all of the iRest teaching staff for the trainings, retreats and support. Gemma also treasures the connections made throughout the iRest community. She feels blessed to be working with veterans and their spouses, bringing iRest workshops to her community and to Ireland this summer!